Home » Cancer » What is Chronic Myeloid Leukemia? What are CML symptoms?

What is Chronic Myeloid Leukemia? What are CML symptoms?

by Editor
in Cancer 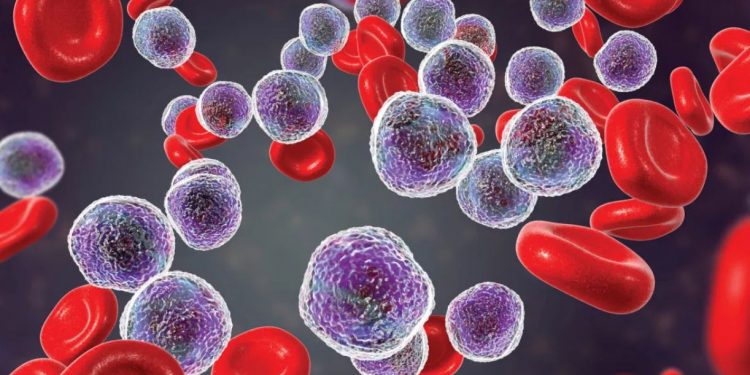 What is chronic myeloid leukemia (CML), which is more common in men? What are the symptoms?

The causes of chronic myeloid leukemia are not yet known, experts say, and this disease is more common in men and very rare in children.

CML disease is a slow-moving cancer of the blood and bone marrow, usually seen after middle age. 2 new patients per 100,000 are diagnosed every year. The most common finding in CML patients is spleen growth. Although the causes that lead to this disease are unknown, they are not hereditary or contagious.

It is more common in men than in women and is very rare in children. Normal cells in the body have 23 pairs of chromosomes. In these patients, the 22nd chromosome has a non-hereditary structural genetic disorder.

The 22nd chromosome, which has been impaired/altered, is responsible for the uncontrolled increase in blood cells and the prolonged life span of these impaired cells. The new product resulting from this gene disorder is called BCR-ABL and causes CML disease. In the early stages of the disease, patients usually do not have complaints.

In the most important part of the patients, the number of white blood cells is high in the blood test performed in the hospital where they are admitted for other reasons. When the disease progresses, there may be fatigue, fever, night sweats, weight loss, fullness under the ribs on the left side of the abdomen, feeling of pain.

Thanks to advances in medicine, especially new drugs discovered in the last 20 years, the life expectancy of patients with Chronic Myeloid Leukemia has reached the same level compared to the general population.

It is very important that those who have the disease always stay away from smoking and practice exercise.

What complaints do patients with Chronic Myeloid Leukemia have?

In the early stages of the disease, patients usually do not have complaints. Approximately 40% of the patients are diagnosed with high leukocyte levels when blood tests are performed in the hospital they go to for other reasons. With the progression of the disease, symptoms such as fatigue, fever, night sweats develop. Some patients experience weight loss. In some patients, due to spleen growth, the complaint of feeling fullness and stiffness occurs in the upper left part of the abdomen, under the left rib. These findings can be seen in chronic myeloid leukemia, as well as in many other diseases, so when these symptoms are suspected, a doctor should be consulted.

Can CML be confused with other diseases?

In infections, chronic myelmonocytic leukemia, organ cancers such as colon and stomach cancers, the number of leukocytes can increase greatly, as can sometimes be done with CML. The exact diagnosis will be determined by your doctor.

What is the course of Chronic Myeloid Leukemia?

There are 3 stages of the disease called chronic, axle (accelerated) and blastic stage (turning into acute leukemia). When patients are diagnosed, they are usually in what is called a chronic stage. At this stage, the disease is slow and the complaints of the patients are few, they live their normal lives, they are rarely hospitalized, they receive their treatment from the outpatient. In order to regulate drug doses during this period, they should have regular blood tests and examinations in accordance with outpatient follow-up. The duration of the chronic universe varies from patient to patient, but when it is not treated or treatment is not responded to, the average is 3 – 4 years. At the end of this period, patients enter what we call the phase of axle (=accelerated).

At this stage, in addition to an increase in the symptoms of the patient (fever, weight loss, fatigue, bone pain, etc.), the size of the spleen increases during the examinations. The number of blood leukocytes tends to increase further, and doses of drugs given to keep this increase in check increase increase. This period can last from a few months to a year. After the accelerated stage in patients, the so-called blastic stage develops.

At this stage, chronic myeloid leukemia turns into acute leukemia. During this period, fever develops in patients, bruises occur on the skin, weakness, fatigue, bone pains, etc. symptoms increase gradually. During the blastic phase, patients should be treated in hospital. The response rate of the blastic universe to treatment is usually low. The hematologist who monitors you will assess your blood and bone marrow to tell you at what stage your disease is at.

What are the treatments used in Chronic Myeloid Leukemia?

Treatment in CML varies according to the chronic, accelerated, blastic stage of the disease and the age of the patient.

Patients are usually in a chronic stage when they are first diagnosed and their leukocytes are very high. Leukocyte numbers can sometimes reach very high numbers and clog the vessels, and when such risky situations occur, some of the leukocytes may need to be removed from the body by performing a procedure called leukapheresis with instruments called cell ceperators. In this procedure, blood is constantly taken from one arm of the patient and the cell comes to the instrument called separator.

Here, leukocytes are separated from the blood and collected in a bag, the rest of the patient’s blood (red blood cell, plasma, platelet) is returned to the patient from the other arm. The leukapheresis process takes several hours. Your doctor will decide whether leukaferesis is required. In patients who do not need leukaferesis, the very high number of leukocytes can be reduced with a drug called hydroxyuree.

CML treatment has changed significantly over the years. While the treatments aimed only at keeping the disease under control were applied to chronic patients, treatments that could completely change the negative course of the disease and form a cure have been raised.  Busulfan and Hydroxyure, which were commonly used many years ago, make positive changes in blood counts but do not provide cures.

The drug Imainib (Glivec), which was found in CML patients about 10 years ago and is aimed at eliminating the effects of the Philadelphia chromosome (tyrosine kinase inhibitor), forms the basis of first-line treatment today. Imainib, which is still the most widely used CML drug, has significantly changed the course of the disease in a positive way. This drug not only controls the symptoms of CML, but can eliminate the Philadelphia chromosome in a significant number of patients. After the discovery of this drug, the number of stem cell transplantation applications in CML cases worldwide has decreased greatly and has become applied only in certain patient groups.

In addition, dasatinib (Sprycel) and Nilotinib (Tasigna) can be used as second-generation tyrosine kinase-blocking treatment alternatives from patients who cannot use or respond to Imatinib treatment due to side effects.