by Editor
in Diet
A A 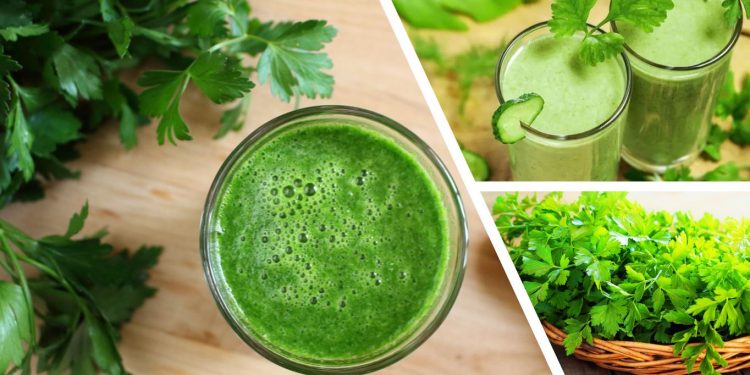 How to make parsley juice that helps to lose weight? Parsley, which adds flavor to dishes with its green leaves and spicy taste, has many health benefits. Parsley, which can be added to diets with its low calories and vitamin content, also contributes to the strengthening of the immune system.

Parsley is a green leafy, spicy plant. There is an intense aroma in its smell and taste. Parsley, which can be consumed in salads, on meals as an ornament or in the form of smoothies, can also be used as a side dish in addition to dishes, is an indispensable food for the body. It adds both health and flavor to the dishes. 100 grams of parsley have 36 calories, 56 mg of sodium, 554 mg of potassium, 133 mg of calcium, 133 mg of vitamin C, 50 mg of magnesium.

Caution: It is necessary not to over-consume parsley juice

Drinking excessive amounts of parsley juice can cause dehydration. There is no weakening unless the fat is excreted. Parsley detox benefits the excretion of edema in the body. Parsley lemon curing can also be made according to the need. But it should not be consumed in large quantities. The need for parsley curing is decided after the nutritionist and dietary specialist has done the necessary tests.

Best ways to stick to a diet and lose weight

Lose weight in 5 steps: No need to count calories!

Besides the use of parsley in combination with diets, it has many benefits. It is possible to itemize them as follows:

10-15 sprigs fresh parsley leaves and peels of a lemon are put in 2 cups of water. After boiling for 2 minutes, it is left to brew. After 5 minutes of brewing, it is filtered and drunk. Drinkers of parsley juice often claim to lose weight. But it should be remembered that weight loss will occur not only with such cures, but also with a healthy diet and exercise pattern.

Pregnant women can also consume without overdoing it

It is said that the consumption of parsley during pregnancy can cause a miscarriage. The consumption of several branches of parsley without overdoing it has no problem in pregnancy. In addition, although it is stated that supplements containing parsley reduce the flow of milk during breastfeeding, this has not been proven by studies. Therefore, parsley can be consumed during breastfeeding without overdoing it.