Home » Nutrition » Aquafaba: A new trend in nutrition! How do we make it?

Aquafaba: A new trend in nutrition! How do we make it?

Aquafaba was a liquid used by our grandmothers for different purposes, but it didn’t reach the new generation. Our discovery of Aquafaba (perhaps hard to believe) was thanks to vegetarians!

What is the new nutrition trend Aquafaba?

It’s so simple. Water left in the pot after scalding the legumes you know! When we came to yesterday, the water that we took from it and poured it into the sink!

It was formed by the combination of the Latin words “aqua” and “faba” (legumes). And it is an egg alternative food that the pastry industry now widely use!

Dietitians also asked questions about “Aquafaba” and we received interesting answers from each other. Our first question was “What is this Aquafaba?”

“Aquafaba is the name of the water in which legumes such as chickpeas or beans are cooked or stored. Of course, there are many legumes that are boiled, such as beans, lentils, chickpeas, pods, etc. There are a few reasons why Aquafaba is so valuable. First of all, this water boiled in legumes contains a high content of starch, and starch is a form of energy storage consisting of two separate polysaccharides called amylosis and amylopectin found in plants.

Aquafaba is also known as ‘sticky liquid’. This is because when the legumes are cooked, the starch in them swells by absorbing water and eventually divides into the water where amylosis and amylopeectin are boiled together with protein and sugar.”

Our Grannies used it, we forgot!

How and when did Aquafaba come up worldwide and why was it preferred?

Dietitians emphasize that Aquafaba has a shorter history than thought:

“Our grandmothers used the pulses they boiled in soups and pastries, but the fact that it became a worldwide trend was in December 2014, when French chef Joel Roessel posted aquafaba, which he had been using for some time, on his blog. Thus, it was noticed that Aquafaba replaces egg whites, which can be used as a foaming pastry material. This was especially enjoyed by vegans who did not consume any foodstuffs obtained from the animal, and therefore the egg, because Aquafaba could be used perfectly instead of eggs.”

When we ask about the nutritional value of Aquafaba, Dietitian Emre Uzun explains: “This is a new trend. That’s why our knowledge of nutritional value is limited. Nevertheless, we can say that one tablespoon (15 ml) aquafaba contains 3-5 calories, which come with less than 1% protein. Likewise, it contains a small amount of certain minerals, such as calcium and iron, but it is not a good source of calcium and iron. On the other hand, there is no reliable nutritional information about Aquafaba yet. This information is sure to become more popular as we learn more about its benefits on health!”

Where and How to Use Aquafaba?

Dietitians want aquafaba to give an example of where it is used:

“It’s used a lot. The first thing that comes to mind is the use of egg whites instead. Just pay attention here: it can only be used instead of egg whites, not egg yolks! This is good news not only for vegans, but also for those allergic to egg incursions. In this way, they can comfortably consume desserts such as cakes, brownies, frozen creams and macarons, where egg whites are necessarily used in their construction. Likewise, it can replace egg whites like mayonnaise or sauces made with garlic, olive oil and egg whites. The approximate size is as follows: 3 tablespoons (45 ml) Aquafaba, 1 egg white!

“Secondly, it can replace milk for vegans and lactose intolerance. Therefore, recipes containing milk and butter are no longer in the “no-tasting” class for both vegans and those who are allergic to milk. To give a small example, it is possible to obtain a type of dairy-free butter by mixing Aquafaba with apple cider vinegar, coconut oil, olive oil and salt.

More importantly: an excellent solution for everyone with PKU.

If you say what is PKU, it is commonly and known as “phenylketetonure” disease. It’s an inherited and metabolic disease. You remember the test with blood taken from the ankles of newborns. Its purpose is to determine whether the baby has PKU. PKU is hereditary and children born with this disease must avoid phenylalanine for life. Otherwise, the brain will suffer severe and permanent damage, and even babies born healthy will become mentally impaired.

Phenylalannin, on the other hand, is a protein building block. It’s supposed to enter the body with what we eat and drink, but in patients with PKU, lifelong blood phenylalannin levels have to be kept below a certain limit. This can also be achieved with a low protein diet, but such nutrients are difficult to find. Here aquafaba is the perfect solution for PKU patients with its low protein! 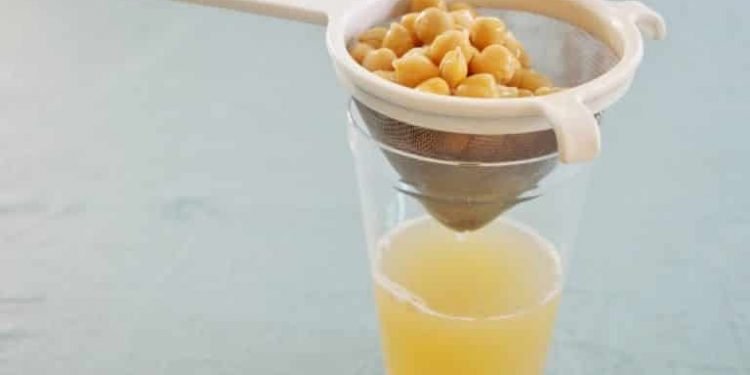 Ways to Get Aquafaba

Dietitians also explain how to get Aquafaba: “Chickpea juice is Aquafaba itself! You can also boil chickpeas, dried beans, fritters, pods, lentils, peas and use the remaining water as Aquafaba. By the way, let’s remember right away: the protein, carbohydrates, fats that Aquafaba contains; therefore, the calories it contains are very low and contain a very small amount of vitamins and minerals. Yes, it can be used instead of eggs, but in no way does it have the nutritional value of the egg. For example, an egg contains 77 calories, 6 grams of protein and 5 grams of fat, it is important to remember this!”

Cream: When aquafaba is used in combination with sugar and vanilla, you can get sugar-free cream.

Cream and Foam: Provides foam formation when used instead of eggs. This foam is also necessary in cakes and when preparing muffin dough.

Macaroon: You can prepare macarons using Aquafaba instead of egg white.